Boundary Description of Board Area 8

East on Regional Road 32 to its intersection with Regional Road 23 (Lakeridge Road, Road Allowance between Townships of Georgina and Brock).

Then, following the shore of Lake Simcoe in a generally westerly and southerly direction to its intersection with the centreline of the Holland River.

South along Leonard Road to Highway 9 (Road Allowance between the Townships of King and Tecumseth).

West on Highway 9, then along Buena Vista Road to its intersection with Highway 10.

North along Highway 10 to the intersection with Broadway.

West along Broadway to Townline Road.

South on Tremaine Road, and on the unopened road allowance at a deviation to the east located 2000m north of Lower Baseline Road, returning to and along the traveled Tremaine Road to its end at Dundas Street.

South on the unopened ORA between the Towns of Burlington and Oakville, crossing Bronte Creek, until returning to a traveled road named Burloak Drive in the ORA some 200m north of Upper Middle Road.

South on Burloak Drive and the production thereof to the north shore of Lake Ontario.

East along the north shore of Lake Ontario to the point of beginning.

Including in Board Area 8 the following lands outside of the perimeter directions description above.

All of the lands known as the Toronto Islands in Lake Ontario.

The waters and bed of Lake Simcoe extending to the limit of the municipal jurisdictions, as they extend into the lake, of East Gwillimbury and Georgina.

The waters and bed of Lake Ontario extending to the boundary of the Province of Ontario to the limit of the municipal jurisdictions, as they extend into the lake, of Oakville on the west and Ajax on the east. 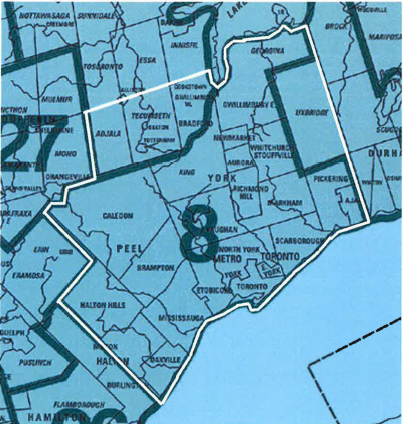